Don’t Starve Together’s Wendy Is Getting A Character Update Soon!

If you’re a fan of survival games, there’s a good chance you’ve played Don’t Starve and/or the multiplayer variant, Don’t Starve Together. Players are dropped into a Tim Burton-esque world as they struggle to survive against incredibly difficult odds, fighting against nature and the supernatural at every turn.

Mods offer a practically unlimited number of playable characters, but the base game has a great handful as well. One of these, Wendy, is getting a sizeable rework in the near future.

Wendy is a frayed little girl haunted by the kind and helpful ghost of her twin sister, Abigail. Abigail looks after Wendy from the afterlife, helping her whenever possible – especially in combat – once summoned from her flower.

“Abigail never stopped looking out for Wendy – and now Wendy has discovered how to return the favor,” Don’t Starve Together’s blog reads. “Her affinity with the supernatural has led her to the mysterious practice of Ectoherbology, allowing her to create haunting elixirs to aid her sister beyond the veil and make their bond stronger than ever before.”

COMING SOON: A character refresh for Wendy🌺👻 in #DontStarveTogether!

The character “refresh” arrives in less than a week on March 19th! Here are the primary changes that the developers list out in their patch notes:

Those are the primary changes that the developers have laid out. It’s worrying to see that Wendy’s damage has been lowered, as she already was considerably weak when it came to a fight, but given that Abigail is getting a buff it’ll certainly even out. The Ectoherbology addition will likely bring a good amount more survivability and variation to the ways that you can survive, as well as emphasizing new materials that weren’t needed before.

Wendy gets her changes on March 19th, so be ready to keep Abigail healthy and do your best to avoid starvation!

Minecraft Is Being Used To Bypass Censorship By Reporters Without Borders, And It's Genius 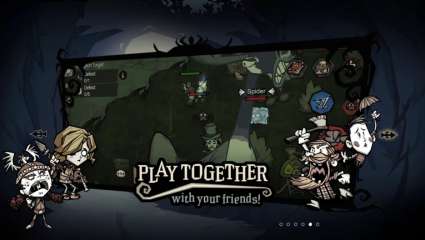 Jun 29, 2020 Joshua Goodpastor 4390
The next installment of the fascinating horror series Don't Starve has announced its upcoming beta for mobile fans. Don't Starve: Newhome is...

Apr 1, 2020 Kenny Kimberly 4470
It's April Fool's Day, and plenty of developers are getting in on the action! Some have been announcing bogus new characters (looking at you, Riot...

Mar 13, 2020 Kenny Kimberly 24831
If you're a fan of survival games, there's a good chance you've played Don't Starve and/or the multiplayer variant, Don't Starve Together. Players...